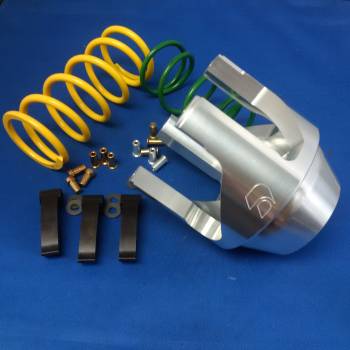 The Turbo Maverick has a decent all around clutch calibration if just trail riding with stock tires. It can, however, quickly develop belt heat issues in high load situations like larger tires and soft terrain. This is primarily a kit developed to help recover power losses and belt performance when using oversized tires on the two seat version* of the Maverick Turbo. The kit does, however have settings for stock tires for those that use the vehicle in soft terrain or switch tires seasonally, etc.

This one clutch tuning package can be set up to optimize CVT calibration for different tire sizes and applications. This kit includes adjustable mass flyweights for more flexible tuning options. A new case-specific flyweight was built for this application, designed to work with the other parts provided in the kit. Includes “set-up manual” as well as clutching overview for this model.

What about the MAX (4 seat version) ?

*This kit was designed, tested and developed on a two seat version of this vehicle. CVT clutch calibration is “controlling rate of shift of the belt” in many situations. It is related to HP, weight of the vehicle, terrain application, tires, etc. The correct clutch calibration is always vehicle and application specific. In some instances of other side by side vehicles we can use the same or similar kits in both vehicle versions with different instructions. In others, it requires a kit with some different components.

Although these parts will physically “fit” the clutches and could help, we have not tested a four seat MAX version of this vehicle and thus cannot comment or make recommendations for that application.

Additional Notes:
Calibrations and settings listed in the kit are for the stock hp of the vehicle
Requires some special factory BRP tools and dealer installation.
The stock factory belt is the best for this application.
USD 419.00 419.00 1 419.00
Pricing: $419.00

"Wanted to thank Scott for the extra technical direction. It gave me all the confidence in my 900 rebuild!"

"Did a RZR 900 to 1000 conversion and Scott was able to spec all the correct parts including some key upgrades to make the power I was looking for."

"Second RZR Engine kit I've purchased from MCB. First for my 800 and now My 1000.  Killer parts, always goes together well and their Tech is the best!"

"Real people with real experience and Professional!  Good luck finding that these days.

"I'm a believer now. Tried 2 of the "other" brands of Durability kits both lasted less than 100 miles. Finally used MCB's kit and have over 500 on this kit!, WAY smoother running!"

"Sent both mine and my wifes etecs to Scott and the guys at MCB, outstanding service, and they both run flawless"

"Best engines in the U.S. hands down!"

"Sent my 2012 Etec 800 to MCB and glad I did.  Excellent communication, 2 week turn around and it runs better than when I bought it new!"

“I really appreciate Matt and his staff taking the time to answer all of my questions over the phone similar to what a good parts-counter person would do at a respected dealership. I also believe MCB Performance offers quality items at very reasonable prices. ”

“For over 2 years, I have been purchasing snowmobile engine parts and accessories from your company, MCB Performance. You and all employees have great customer service, and knowledge of the products sold.”